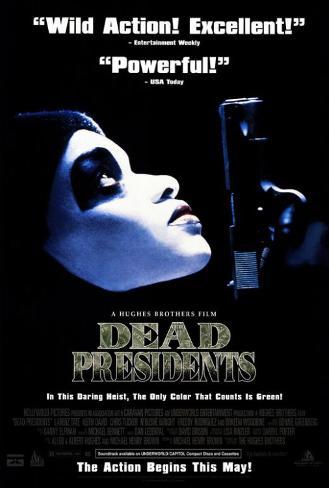 A Vietnam vet adjusts to life after the war while trying to support his family, but the chance of a better life may involve crime and bloodshed. This action film, directed by the Hughes brothers, depicts a heist of old bills, retired from circulation and destined by the government to be "money to burn." However, more broadly, it addresses the issues of Black Americans' involvement in the Vietnam War and their subsequent disillusionment with progress in social issues and civil rights back home in the United States, during the 1960's. I've had this one sitting in my cupboard for about two years and now that I had the chance to have a couple of brews and check it out, I'm quite pleased with my decision to watch this one, and decided to comment on it because I think this movie has something in it that I haven't seen in a while ... no unnecessary effects, okayish plot, good, role-fitting actors. Basically NOTHING unnecessary, which is a common flaw in movies today. People have dissed this movie here in IMDB for various reasons, but I think that this kind of flicks have become a rarity nowadays and I think that this sort of film-making will become popular again pretty soon. It's like watching Tarantino without having the need to pay that much attention to everything that's happening in order to grasp what's going on, if you know what I mean. All in all a good movie, not legendary, but anyway one of the better ones. A 9 in my scale. A lot of the complaints of this film stem from attacks on the last 30 or so minutes of the film, the robbery. And all because of what they saw in a trailer more than likely. When are people going to get it in their heads? Trailers very rarely tell you the whole or even primary point of a story. If all the trailers did that, it would be spoiling the film. Only desperate slop movies do that with their trailers. Dead President, like most good films these days and in the past, deals with the human condition. It deals with how African Americans had it tough after coming back home after the war. I'm pretty sure that it was more than just African Americans who found it tough, but that is the primary focus here. It's well acted. Well written. Well directed. It's not perfect, but I've seen very few films that come close to that status. To me the film isn't even about the heist and some morons are actually judging the whole movie on the last minutes of it. I'll admit that it's rather depressing that Larenz Tate's character goes to jail, but that's reality. It happens. Key word : reality. Life isn't a fairy tale.

8/10 from me. Dead Presidents already had problems before the theatrical release with the MPAA and some scenes had to be cut. Unfortunately, there is no available release containing these scenes. The Criterion Laserdisc release offers something in between. The raid on the money transport at the end of the film is found a second time on the LD after the complete main film. This second version contains said scenes. a5c7b9f00b